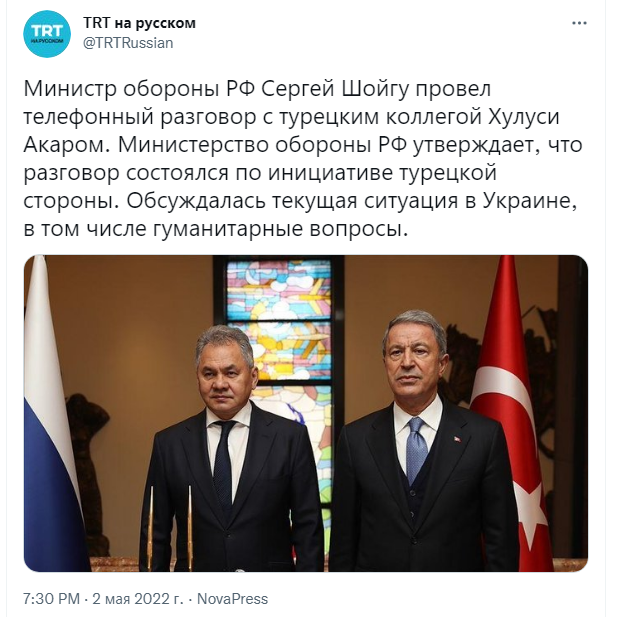 Popular posts from this blog

4/28/2022 06:27:00 AM
Turkey promotes the so-called "Hong Kong model" of reconciliation, under which Russia is offered to receive the territories of Donetsk, Luhansk and the Crimean peninsula for "long-term use". The Moscow-based Institute of the Middle East, which provides expert analytical services to Russian government agencies on Middle Eastern issues, writes about it. The reconstruction of Donetsk and Luhansk will be done at the expense of the Russian side. After a certain period of time (various periods of time are mentioned, on average 50 years), Russia will have to return these territories to Ukraine. As the Turkish side insists, this model is a win-win model for both sides of the conflict. ▪️ For Ukraine - because it will receive a Russian commitment, guaranteed by international observers, that it will get back the territories it considers its own and, as can be seen, no Ukrainian leadership will be able to retain its power by agreeing to the contrary. Thus, Ukraine wil
Post a Comment
Read more

Uzbekistan: Why do migrant workers need Russia when there is the West?

4/27/2022 06:06:00 AM
Experts from the Institute of Forecasting and Macroeconomic Research (IPMR) of Uzbekistan proposed organizing free English language courses. In this way, it would be easier to reorient Uzbeks to labor markets in English-speaking countries and reduce dependence on Russia, the Institute believes. "The high dependence of migrant workers' incomes on Russia (https://t.me/asian_states_in_ukrainian_crisis/801) increasingly aggravates the situation not only in the labor market, but also in the country as a whole. For these reasons, it is already necessary to consider new opportunities for labor exports," reads the publication (https://telp.cc/Kzz) on the website of the institute. Its authors point out that $5.6 billion or 70% of remittances received by Uzbekistan in 2021 came from Russia. That same year, the number of Uzbek migrant workers in Russia was 1,036,305 (according to the Ministry of Employment and Labor Relations).   The mos t attractive destinations for the promotion
Post a Comment
Read more

"Russian business is being flooded with money". MP urged to save Kazakh producers

4/26/2022 02:12:00 AM
Mazhilis deputy Amanzhan Zhamalov said that after the introduction of sanctions to develop import substitution Russian business is flooded with money. Because of this, Kazakhstan's commodity producers may go bankrupt, the correspondent of Tengrinews.kz reports. "Russia has adopted an urgent package of measures to support its business and industry. Another import substitution policy has been adopted. Preferential financing is being increased. Russian business is literally being flooded with money.     On the one hand, it is good for the Kazakhstani people who will be able to buy cheap Russian goods. But on the other hand - we have our own goods and businesses in Kazakhstan, where our citizens work and receive salaries. All of them will suffer from growing Russian imports," Zhamalov pointed out in a parliamentary request to the prime minister. The MP noted that most Kazakhstani businesses have loans. If they lose market and income, they will inevitably go bankrupt.
Post a Comment
Read more